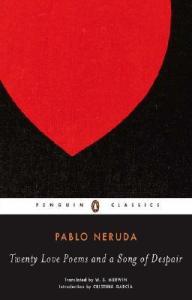 “In you is the illusion of each day.
You arrive like the dew to the cupped flowers.
You undermine the horizon with your absence.
Eternally in flight like the wave. “

– Verse 2 from “Your Breast is Enough” by Pablo Neruda

END_OF_DOCUMENT_TOKEN_TO_BE_REPLACED

I wanted to say a great big thank you to the bloggers who participated in the second week of Quotespiration and took on the mind of The Little Prince!   Voting is now open for Quotespiration Week 2 and I will reblog the winning story next week.

1. “Imagination for  Two” by JannatWrites

Contemplation as defined by Merriam Webster: the act of thinking deeply about something; the act of looking carefully at something

“Why did you bring me up here Joel?”  Sara asked, staring at the large wet snowflakes casually drifting down on the blanketed hill.

“I came sledding here a lot when I was a kid. See that large oak over there?”  Joel pointed vaguely west, but in the snow chocked air the tree was a ghost.  “We’d start at the base of that oak then we’d jump on the sleds on our stomachs, tear down the hill towards that boulder, and use it as ramp.”

“Not when you’re five.” Joel shrugged and took a sip of beer. “I don’t know if the boulder is there anymore, they cleaned the hill up awhile back to make it safer for the little kids.”

“I’ve never been sledding” Sara stated, lying back on the hood of the blue Acura so she could stare at the purple sky.

“Never?” Joel glanced at her and gulped.  Under the knit hat her long black curls formed a snow dotted aura on the hood and her hazel eyes seemed to him as vague in their outer appearance as the oak thru the gusting snow.

“I grew up in Florida with the Rv’ers and Disney Princesses.  Why is it lighter when it snows?  It’s 12am and I can see so much.” Sara tilted her head towards Joel.

“I don’t know.  It’s always like this.  Once or twice I’ve been able to see the Aurora Borealis up here.   But that was ages ago.”  He fidgeted with his bottle and looked the other way towards the glittering lights of the small Michigan town.

“Why are you so strange tonight?  I thought you were happy to be here again, see your family, show me your childhood haunts?”

“I was, but then we got stuck in a blizzard.” Joel gave Sara his lop-sided grin and she smiled gently back at him.

“Personally I’m ok with missing a few more days of work.  Not like I really want to go back.  Did I tell you that Mr. Dawson has been pestering the hell out of me?  He gives me more work than the other paralegals.” Sara sighed.

“Yeah you told me.  Maybe you should be the lawyer, you’d be better at it.” Joel brought one knee up to his chest and leaned back on his elbows.

They sat like this for a time staring at the snow.  The silence of the wind muffling the sounds of the valley.  The flakes started getting larger and buffeting in tornadoes of flashing white.  The visible tree limbs tinkled as their ice encrusted branches rocked in the gusts.  The banks of snow on the hill, in places five feet high, began kicking up shimmering mists of flakes against the purple night.

“What about it?” Sara looked at him intently.

“Joel.” Sara said softly.  “I didn’t know, I thought you hadn’t been back here since you were a kid.”

“I was a kid for a long time.” Joel looked intently at his beer.  “Heather and I decided to move back.  We both grew up here, our families are here, we thought it would be a good place to raise a kid, you know.  Expect. . .expect it didn’t work out.”

“We came up here for a walk, on a summer night.  It started raining and a bolt of lightning hit near the oak.  It scared our dog Jackson and he took off running towards the forest.” Joel took a deep breath.

“Heather ran after him and I ran after Heather. . .Heather ran marathons; did I ever tell you that?. . .Well she could run faster than me and I. . .I lost them.  I kept running and running but no matter how far I ran I couldn’t find them.  I got lost. . . and they had to send out a rescue party for me. . .Jackson turned up at the house a few days later.”

“They. . .I. . .never found Heather.” Joel continued looking down at his beer and Sara placed her sliver gloved hand on his black gloved hand.

Again they sat in silence on the hood with the snow drifting lazily between them.

After some time Joel turned his head to Sara and said softly: “I love you Sara.”

Sara sat blot upright.  “Joel it’s only been a few months and for that matter it’s not been that long since, since you lost Heather.”

“I know, but I love you.  I don’t need time to tell me that; time is a mirage like the snow. . .and Heather.  She was all fun and confidence and speed, a drug with no real substance.  When she left I realized I didn’t know her.  I didn’t know her favorite color, how she liked her eggs, I didn’t know what books she read as a kid, or if she’d had an imaginary friend.  She was all about her job and what happened next.  But you Sara. . .you. . .you are present. ”

Sara looked down at the snow on the hood and began drawing circles with her finger.   “I don’t know if I love you.”

“Is that why you wanted to come here Joel?” Sara looked at him again.

“Yes and no.  I mean this hill, it’s magical. It’s the only place I’ve been that’s as magical as you.”

He reached down and kissed her soft pink lips and slowly they fell back onto the hood while the snow continued to dance in the night.

I’m starting a blog challenge!  See info below and if you have suggestions on quotes or how to make this more awesome please leave thoughts in the comments.

“What I think is this:

you should give up looking for lost cats and start

searching for your shadow.” –

from Kafka on the Shore by Haruki Murakami

END_OF_DOCUMENT_TOKEN_TO_BE_REPLACED 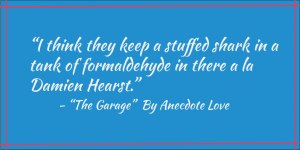 In Part 1 we learned that the Blake’s don’t park in their garage and we heard Peter’s bear theory.  Yesterday in Part 2 Tom expounded his ghost theory which was quickly rebutted by Sara.  And now the conclusion.

The Garage – A Mystery Part 3

“I think they keep a stuffed shark in a tank of formaldehyde in there a la Damien Hirst.” Sara said.

“A what, a la whom?” Joel stared at Sara blankly.

END_OF_DOCUMENT_TOKEN_TO_BE_REPLACED 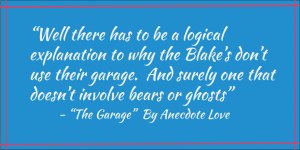 In Part 1 we learned that the Blake’s don’t park in their garage and Peter expounded his bear theory.  And now we continue with Tom . . .

The Garage – A Mystery Part 2

“Well I was here back then too you know Peter.  We being the first family’s to move in here.  Then came Barbara and Ellen, quite the scandal back then. They were the first and last Lesbian bear hunters on the block.”

“I spent a lot of time with them, nice gals they were.  Very well educated, liked cigars, their hobby was genealogical research.” Tom accepted a new drink from Sara and then continued.

END_OF_DOCUMENT_TOKEN_TO_BE_REPLACED

This story is inspired by my former writing prof Mark Jabbour and his astute observations on neighbors.  We begin at the beginning.

The Garage- A Mystery Part 1

They were on round two of Sara’s lemon drop martinis, that everyone secretly hated, when Robert asked “So what’s the neighborhood like?”

“Well” said Sara turning her blue eyes to him, “This is most of us on the cul-de-sac.  Tom and Laura live next door to us on the right.  Peter lives next door to them at the top of the circle.  I would tell you all the gossip on his new model girlfriend, but he’s here.” Sara winked at Peter.

END_OF_DOCUMENT_TOKEN_TO_BE_REPLACED

What is Anecdote Love?

Anecdote Love is a blog devoted to stories. Short stories about love and lose, real life stories focusing on details and humor, and stories to make you feel more deeply.